Do you know that we cannot promote cider in Poland? Sounds ridiculous but it is true. Polish law prohibits alcohol advertising. There is the Act on the upbringing in sobriety and counteracting alcoholism. 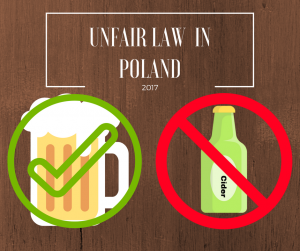 In article no.13 of the act you can read: Advertising of alcoholic beverages shall be prohibited in Poland, except for beer (…). No one can advertise alcohol. Only beer is privileged. Why? We don’t know the true reason but we assume that there is a huge lobby of beer manufacturers who want to keep the privileged treatment of beer and sell more (beer is the most popular alcoholic drink in Poland).

But there are also some restrictions. The beer can be advertised on the TV, radio, press, cinemas only between 8pm-6am.  And drinking beer in an advert cannot be associated with relaxation, learning, success or sexual attractiveness. You can advertise beer on big billboards on streets but 20% of content must have clear information about the dangers of alcohol.

Although the cider has the same percentage of alcohol as beer, in this Act cider is treated as liquor – just like wine.

Moreover, there were about 10 cases when the magazines (including Polish edition of “Forbes” and “Newsweek”) were sued by National Agency for Solving Alcohol Problems for promoting cider. The Agency explained that cider would go to those consumers who haven’t started drinking alcohol yet (for example, young women).  And as a result, there could be an increase in the number of children affected by foetal alcohol syndrome (FAS).

There were some attempts in the past to change the law. The new amendment of the Act was written and submitted to consideration in 2014 but nothing has changed since then.

Paradoxically, some argue that this law is good: thanks to it Polish cider can develop and big foreign companies don’t introduce their brands, which (may be) are of inferior quality (e.g. cider made from concentrate or beer mixed with cider). According to Polish law, cider must contain at least 60% apple juice.

PS. Magners was forced by Polish authorities to remove advertising for cider brand Magners from Celtic football team shirts for a Champions League match against Legia Warsaw in 2014. Read the story here.